04./05.05.2012: Practical Training 'The Comprehension of the Roles of Conflict Researchers and Peace Workers'

Many graduates of the Master's program in Peace and Conflict Research expects a career in the civil conflict. The personality is highly demanded in this job profile, and they do not only need to have the theoretical knowledge applied constructively, but also to be aware of their own role and the inherent responsibility as researchers or practitioners. The two-day hands-on course "the roles of conflict researchers" on the 4th and 5th May 2012, funded by DAAD and Organized by the Peace Researcher Felix Koltermann, raised the awareness of the students for their own central role in conflict situations. (more information in german)

A total of 23 participants from the Master's programs of Peace and Conflict Studies and European Studies, got involved in a two-day trial with the depicted conflict scenario. In the roles of internal and external political actors as well as an international mediator group it was necessary to apply negotiation strategies and techniques of mediation and review policies of peacekeeping on their practical applicability in conflict situations. In two separate committees there were formal rounds of negotiations on security issues such as ceasefire or deployment of an international force as well as political issues such as constitutional law or the rights of minorities.

The simulation game was a closing session and the highlight of the course "Conflict in the Middle East", which was offered in the summer semester under the direction of Dr. Miao-Ling Hasenkamp. It gave students the unique opportunity to experience conflicts from an internal perspective and get an action oriented approach to the otherwise theoretically mediated expertise. For the organization and implementation of the simulation for the umpteenth time, the plan was provided from policy GmbH Berlin, specialized for six years in the alignment of business games in the fields of politics, economy and science, which became a worldwide reputation. More

Fiction and reality are sometimes quite close to each other: Two rivers, whose water supply through the primary industry of several countries stands or falls. The resource is already scarce, but no state bordering accepted reductions in private consumption. Old hostilities and an unbalanced power relationship make the situation even more difficult, which could escalate at any time. - This sounds like the current situation in Central Asia, but it is not. What it is - a simulation game on "water conflict" that on the 11th and 12th February 2011 was held at the OvGU.

16 students of the Master program Peace and Conflict Studies (FKF) took on the roles of five fictitious States and a Commission. Under enormous time pressure, it was hard to find a fair solution for all parties, and at the same time a sustainable approach to water issues. The difficulties of the situation were very clear to the students, bringing the two-day negotiations, not only once to the brink of failure. Thanks to productive negotiation strategies, intensive discussions and last but not least a high willingness to compromise, the parties managed to reach an agreement at the end. Positive feedback and learning were also result of the final evaluation. These are the expectations that the initiator Dr. Miao-ling Hasenkamp and course director Professor Karl-Peter Fritzsche want to use for future projects of this kind for the FKF International Relations at the Department. The simulation was the first of its kind to be offered for the course with the assistance of external experts: The Berlin-based company policy plan, which is well-known for its simulation games. The workshop was funded by the DAAD.

On March 28 - April 1 Maxim and Aikokul from our FKF-MA-Study-Programme (Jg. 2009) have participated in one of the famous UN simulation model in Münster/Westfalen, where "the Treaty of Westphalian Peace" of 1648 was signed. The so-called MUIMUN (Münster University International Model United Nations) took place for the fifth time and has gained considerable reputation for training students of political science for the practice of their knowledge and skills. In this simulation model students assume the roles of the official representatives of different countries to the United Nations and debate the current issues on the UN's agenda. Under the motto "Shape Today - Change Tomorrow", students from different countries and of different cultural backgrounds have arranged and negotiated effectively and skillfully for the maintenance of the national interests involved and thus achieved the best learning effects through intensive discussions and exchanges.

Together with more than 200 other students from different parts of the world, Maxim and Aikokul had the chance to experience first-hand decision-making processes and diplomatic work at the United Nations. The topic of this year was "Humanity vs. Greed - A Roadmap to Global Accountability". The MUIMUN has successfully simulated the work of such UN bodies as ECOSOC, Security Council, General Assembly, GA2, GA3, GA6, Food and Agriculture Organization (FAO) and CEPAL. Among the agendas discussed were the climate change and international security, establishing food security for post war areas, permanent sovereignty over natural resources in politically unstable areas and many other issues relevant for real UN agenda. During the MUIMUN week, thousands of arguments were hotly debated, hundreds of pages of working papers were written, dozens of amendments were discussed, many hard issues were solved. At the closing ceremony the delegates with best performance were awarded.

Besides the official sessions full of endless debates, complicated rules of procedures, exhausting discussions of position papers, hard decision-making and voting, several interesting social events, priceless exchange experience, amazing ideas and new friendships have left the MUIMUN week an unforgettable event for all participants. For example, during the "Global Village" event, the delegates have presented best pieces of their own culture (traditional food, ornamentation and costumes) into the fancy atmosphere of the night club. During the event "MUIMUN meets experts 2011" the participants were offered nine different workshops, held by renowned specialists from across the social scientific landscape.

It is worth mentioning, that MUIMUN is an event organized 100% by students themselves. For one week the students performed and changed their roles from ordinary citizen, ambassadors and to officials of the UN - a great opportunity to apply their own skills and lots of fun, at the same time posing great challenges for the participants. Maxim and Aikokul would like to share their unique learning experience in Münster and strongly recommend everyone to join the MUIMUN week next year.

The DAAD Alumni Seminar was organized at the initiative of FKF Alumni, Ziya Gaziyev from Azerbaijan and Khushbakht Hojiev from Tajikistan, together with University of Bonn, Qafqaz University of Azerbaijan and Azerbaijan Youth Euro-Atlantic Organization. It provided a unique opportunity to discuss questions of conflict transformation and confidence building measures, by bringing together young professionals and experts from Europe, Central Asia and Caucasus. The project was sponsored by the DAAD. 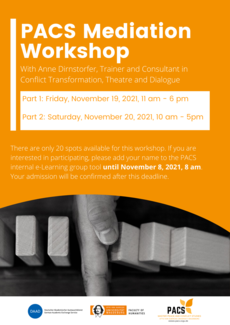